During Abbott’s 80 plus year history, the magic shop has supported the side show industry manufacturing many of these effects and to this day still sells workshop plans to them. This year, as a special celebration at the 80th Magic Get Together we are endeavoring to bring a slice of the experience to our guests. At intermission during each evening show a different sideshow will be created. These will be performed outdoors and as close to the conditions faced by those fantastic performers 50 years ago.

Imagine it, traveling 50 years into the past, the date is now 1967 and more than seventy-five million people in the United States are visiting a carnival of some sort. Tens of thousands will also buy a ticket to see a side show. In 1967, all of the larger carnivals carried a major side show (it was a multimillion dollar enterprise) and many of these side shows used magicians. Many of these magicians would use various small illusions or illusionettes as the spectators would move from one stage to the next until they had seen them all, and then the show would begin all over again. Some of the small illusionettes popular in 1967 would be Abbott’s Sword Through Neck, Abbott’s Dagger Chest, and Abbott’s Arrowhead.

However, in addition to the magician and illusionettes, most large side shows presented one or more large illusions – and these illusions all have special place in magic yore and the focus of this event.
The “Girl In The Electric Chair” was one such illusion, where various bulbs would light when coming in contact with the girl, yet show after show the girl somehow survived the sizzling energy constantly being sent through her body. The “Girl In The Electric Chair” (or some variation of this illusion) was quite popular and a side show standard.
The “Coffin Blade Box”. The girl is placed in the box and the blades are pushed through in every possible direction so that there appears to be no room for the girl. Then the spectators were invited up to look into the blade box and see the “unusual position” the girl is in. For this expose there is an additional charge of twenty-five cents. 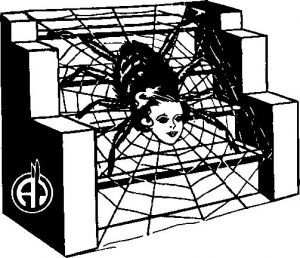 “Spidora” the Spider Girl was an easy illusion to present and required only the girl to work the illusion and an inside talker or lecturer who told all about this “poor little creature.” They saw the living head of a girl attached to the hideous body of a large spider, enmeshed in a web on a stairway. They saw each step under the web and there appeared to be no place for the girl to hide her body. It was often presented as a freak of nature and the entire presentation would take about five minutes. The tent would be cleared and another group of waiting spectators were ushered in.
“Minnie the Mermaid,” the tiny girl in a goldfish bowl was an illusion that turned out to be very profitable
for side shows. It could be used it during summer months at carnivals and during the winter months it could be rented it out to local department stores as a special window display. In the older version the girl was behind the bowl and spectators saw her through the bowl which was fitted with a special lens. The trouble with this version was the girl never really looked like she was in the bowl; it looked like she was behind it. The Abbott version did not require an elaborate set-up; there 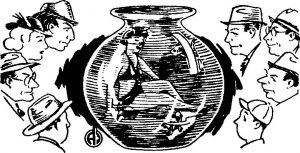 was a special cabinet which required about 4 feet of space and the bowl appeared to be on top of this. The girl looked like she was in the bowl. The audience would be about 5 feet in front of this. It was a cute illusion and was presented with a very pretty girl in a scanty costume. The show had sex appeal as well as mystery.

One of the most unusual illusions at the sideshow was called “Icy.” A beautiful girl was frozen in a huge cake of ice. She was displayed in the center of a tent and spectators walked around her. Advance newspaper publicity offered a cash reward to anyone who proved the girl wasn’t buried in ice for 48 straight hours. The exhibit was open for inspection any hour of the day or night. There was a 25 cent admission charge. 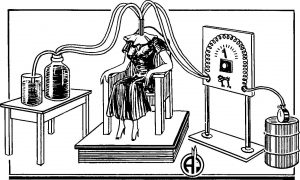 Another illusion that adapted itself well to a sideshow was the Headless Girl. The poster depicting the headless girl was almost always of an exaggerated nature. The picture rarely showed the girl as she appeared in the actual illusion — sitting in a chair with tubes running into her neck. Rather they would picture the girl sitting on the beach, or walking down the street or doing things a normal person does in daily life. An inside lecturer told how the girl lost her head as spectators view the girl minus her head. She moved her hands and legs to prove she was alive.
Promotion of the illusion with posters and banners at the sideshow was often as important (if not more) than the illusion itself. The “Burned Alive illusion” was seen having the entire entrance to the tent made of a series of panels, each showing scenes of a beautiful girl being burned alive. The name of this sideshow was “The Crematorium” and it had horror, magic, and sex all combined.

The most amazing sideshow illusion playing the large carnivals in 1967 was the Girl to Gorilla. A girl enters a cabinet and closes the door consisting of a series of bars about ten inches apart. As she stands there facing the audience her body begins to grow hair and to gain bulk and she visibly turns into a huge gorilla! The gorilla then lunges forward, throws open the cage door and jumps into the audience. The effect happened so quickly and was so startling that the audience reaction was almost as amazing as the illusion. For a brief moment they believed the gorilla is real and most of the audience ran quickly out of the tent. Needless to say this has an effect on those on the outside, who rush to buy tickets to see what it is all about.

Last year (2016) at the 79th Abbott Get Together, the Girl to Gorilla Illusion was shown during intermission of the Thursday Abbott evening show. The sideshow event (sponsored by Five Star Pizza) wa 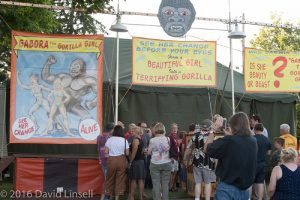 s a big hit as folks were able to enjoy the excitement of these wonderful shows, albeit for only one night. Standing on the shoulders of this success we are hoping to bring that same excitement except with 4 different sideshows to be performed during intermission of each of the Abbott evening shows. Which illusions will be performed we are not saying, however we will say that each will be an experience in showmanship and fun and will creating lasting memories for you and your families.

Big thanks to Keith Stickley for putting this together, thanks to the event sponsors of these four huge events, and a special thanks to Walter